Plethora concludes this year’s event schedule with two entries into ROMP Fair 2015. The Dice of Sin and Smartphone Tablet Sets will be available from the event beginning 2nd October 2015 until 16th October 2015. More info on the event is available at their blog site here.

The Dice of Sin will be available for L$125 and the Smartphone Tablet Sets for L$150 per tablet-phone pair. Both will be moved instore post-event. 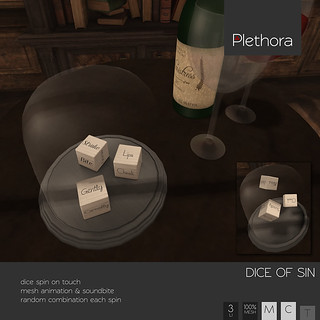 Simply touch the Dice of Sin to trigger a random combination of dice, complete with mesh animation and soundbites. Great to have in the living room or for when you have “special friends” visiting to watch Netflix and chill.

The smartphone will make a unique soundbite upon touch and light up to reveal a lock screen and light up the LED on top. After a moment, it will go dark again.

The tablet is dual-purpose; it can rezzed inworld as a decor item, or attached to your avatar as an accessory. When rezzed, simply touch for it to light up and reveal a lock screen, which will in turn slide up to display the tablet desktop. When worn, simply begin typing in local chat for a typing animation override and texture animation onscreen to trigger.

There will be two variants of each of the two colour styles to cater for both innie-friendly and outie-friendly types. 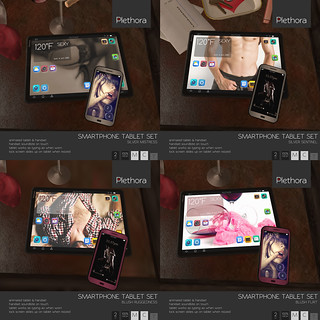 We hope you enjoyed Plethora’s entries for 2015 and as always, it has been my pleasure! Since we’re talking about pleasure, go have fun at the event. Watch a lot of Netflix. Chill a lot.

This February, Plethora will be participating in the Winter ROMP: Fresh fair for elegant kink, held on Transcendence region between 6th Feb 2015 (12pm SLT) and 19th Feb 2015.

The clocks boast twelve naughty positions at each hour gilded in gold, silver, blush marble or black. They are menu-drive to adjust time (just touch them anywhere), include a Daylight Savings feature toggle and the shadow panel can be unlinked as desired. These sexually-charged time pieces for your modern wall or home will be sold at L$200 each.

The trays come in two flavours – For Him and For Her. We worked hard to make sure they’re not too bound by sexual orientation, so you should be able to find something for straight, gay, lesbian, bisexual, pansexual kink connoisseurs alike 🙂

The trays also come with baked-shadow and no-shadow textures provided so you can use the tray separately. Everything on the tray is also unlinkable from the tray (including the shadow pane). The trays will be sold at L$150 each.

Winter ROMP: Fresh fair begins from 6th February 2015 (6am for Elysion members & 12pm SLT for general public) and lasts for two weeks until 19th February 2015, and will be held on the Transcendence region. More details on their Flickr, website & Facebook.

Kink Tray (For Him) & Kink Tray (For Her) – 2 variants, L$150 each, 100% mesh, 5 land impact each, unlinkable parts from tray (including shadow pane), baked-shadow and no-shadow textures supplied, event item.

Availability: Winter ROMP: Fresh fair (by ROMP), 6th February 2015 until 19th February 2015. Note that Elysion members are granted early access at 6am SLT on the 6th, with general admission beginning at 12pm SLT. Hosted on Transcendence region. They will be moved in-store and onto Marketplace post-event.

Plethora are proud (and quite frankly, DELIGHTED) to bring you Flying Brooms (!!) for Gachatopia‘s Tag! Halloween Gacha event.

There are a total of 10 brooms to play for, each one with it’s own unique stats that tailor different flight profile experiences. There will be two rares, Lightning and Juggernaut, as well as one mystery rare prize that will offer a coupon that you can claim at the Gachatopia home region. The brooms will be available for L$50 per gacha play, but the exclusive mystery rare will be unavailable after 31st October when the event finishes.

Simple enough to use; just wear the HUD, touch it to rez a broom and sit on the rezzed broom to begin flying! Be careful, though – if you fly too fast and collide too hard with another object, you will be knocked off and be forced to hang off your broom in mid-air until you recover. Your HUD can rez many brooms for friends to join in on the fun! Just one tip, though…try to get a bit of altitude before you start attempting some mean twists and rolls! For further information, please refer to the help poster:

Note: These brooms must be rezzed from the transferable rezzer HUD (brooms will disappear if you attempt to rez them from inventory or give them to someone else). Unfortunately, to preserve script integrity and next-owner permissions management, the rezzed brooms will not be modifiable and may not fit exactly to your avatar’s size or shape. The brooms are designed with petite shapes and teenagers in mind.

Availability: Gachatopia’s Tag! Halloween Gacha event (machine will be at Scribbled Hearts main store from 17th October 2014, 12am SLT and runs until 31st October 2014 12am SLT).

Many thanks to Katya Valeska for allowing me to borrow her for the vendor poster.

Plethora are teaming up with tarte. for the Cutie Moon Fair this April, releasing a collaborative effort – the Gem Compacts. There are 6 commons and 2 rares to play for in a gacha on-site at the event, at L$50 per play.

These cute compacts have gems that will glow when you touch them. Touching the compact anywhere else will toggle the lid open and closed. Upon opening, each gem compact will play a unique musical tune to mark your transformation.